For a long time, Irish companies have hesitated to use cloud computing. But that is now changing very quickly - and they are using several cloud providers all at the same time. Research in Action was commissioned by Interxion to conduct a study to determine this. It examines how many companies are using an integrated multi-cloud strategy, the benefits they see and where the obstacles lie. Research in Action surveyed 1,400 people from seven European countries, 150 of them from Ireland. These were IT decision-makers in companies with an annual turnover of 250 million euros or more. 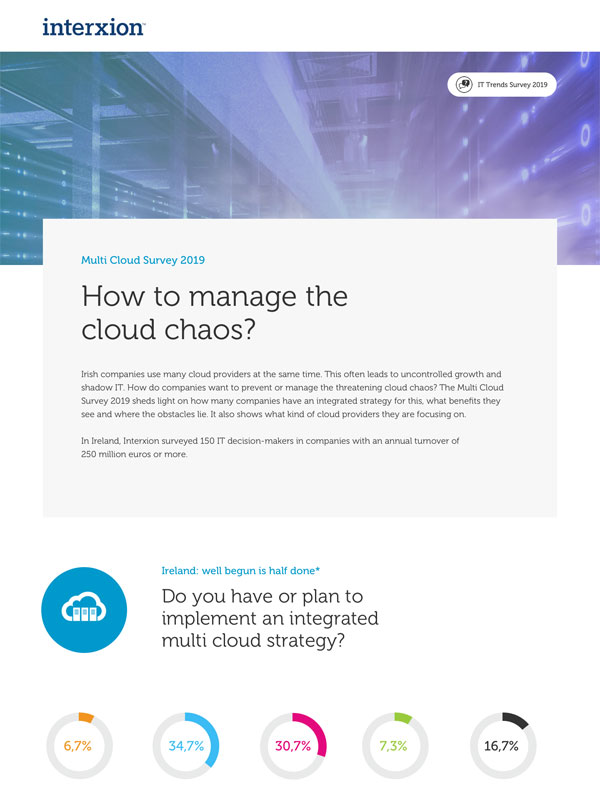 The adoption of MultiCloud strategy

The MultiCloud system is a clear reality of the next era in cloud computing but only 6.7% of Irish companies have implemented an integrated MultiCloud strategy while 16.7% said MultiCloud has grown organically. Companies are attempting to match their cloud strategy to their business objectives, but reluctance remains due to a number of possible mitigating factors.

What are the benefits of an integrated MultiCloud strategy

The survey shows that 18% of Irish companies say the technical advantages of the MultiCloud were the main deciding factors.

For Irish companies 30.0% stated they flexibly use the Clouds that are most cost-effective for their specific purposes, compared to the European average at 26.1%. 19.3% stated that maximising reliability for services while 14.7% said avoiding vendor lock-ins were the main benefits they identified. Only 5.3% want to improve data privacy with a MultiCloud strategy despite the potential threats that come from a security breach. The European average was 5.0%

What are the barriers to a MultiCloud strategy

Every country that participated agreed that the largest obstacle to implementing an integrated MultiCloud strategy was the integration of services between cloud services because it was difficult to manage. 29.3% of Irish companies found this problematic while 19.3% stated that the increased complexity of managing various services was the biggest barrier. 16% of respondents stated that security risks were a barrier to MultiCloud strategies.

Which areas are particularly promising for MultiCloud

30% of Irish companies stated that they view Platform as a service (PaaS) as the most promising area in the MultiCloud system because it delivers a framework for developers. Developers can build upon existing and create customized applications. Companies also believe utilizing PaaS is beneficial or even necessary. If there are multiple developers working on the same development project, or if other vendors must be included as well, PaaS can provide great speed and flexibility to the entire process.

The Infrastructure as a service platform (Iaas) which ranks highest on the average European scale comes in a close second in Ireland at 29.3%. IaaS is the most flexible cloud computing model, it also gives clients complete control of their infrastructure which is extremely important in today’s society. Hybrid infrastructures comes in at 19.3% while Software as a Service (SaaS) is at 16.7%. Ultimately, the three most important characteristics companies look for in a MultiCloud strategy is total cost savings, security and faster delivery time.

Which provider is best suited to MultiCloud strategy

Cloud chaos is problematic but can be managed easily with the correct use of MultiCloud strategy. The general shift in business priorities is leading to more companies adopting MultiCloud strategies, but which is the best provider? When determining what is most important, companies seem to prioritize performance of the application over compliance and security regulations and availability/resiliency requirements.

Irish companies rely on the HyperScale Clouds like AWS, Azure and Google Cloud favourably with 35.3%. Similar understanding with the European countries who also favour HyperScale Clouds like AWS, Azure and Google Cloud with 30.5%. Second is the industry-specific cloud offerings in combination with hyperscalers (18.7%). The following options are scored evenly. Irish companies are following the common trend among their European counterparts and investing in MultiCloud strategies be it purposefully or organically. The next five years will see a considerate increase in Irish companies having a Multicloud strategy in place.

Irish companies want a system where they can build their own framework and design applications of their choosing. For these reasons Irish companies believe the Platform as a service (PaaS) has the most potential followed by the Infrastructure as a service platform (Iaas). These two are the current platform preferences but this could all change in a matter of weeks down to trends in technology being so fickle. When it comes to the best MultiCloud provider, Irish companies rely on the HyperScale Clouds like AWS, Azure and Google Cloud favourably which is on par with their European counterparts. Overall MultiCloud strategies are becoming more common among Irish companies and that percentage will only increase in time. Irish companies are starting to realize that the short-term loss in costs is by far outweighed by the long-term gain.