A Winning Combination for Bwin

Since 2004 bwin have housed their equipment with Interxion Austria. When they outgrew their existing space, they conducted new research into potential data centre providers. Interxion came out on top, not just in Austria but in France as well. 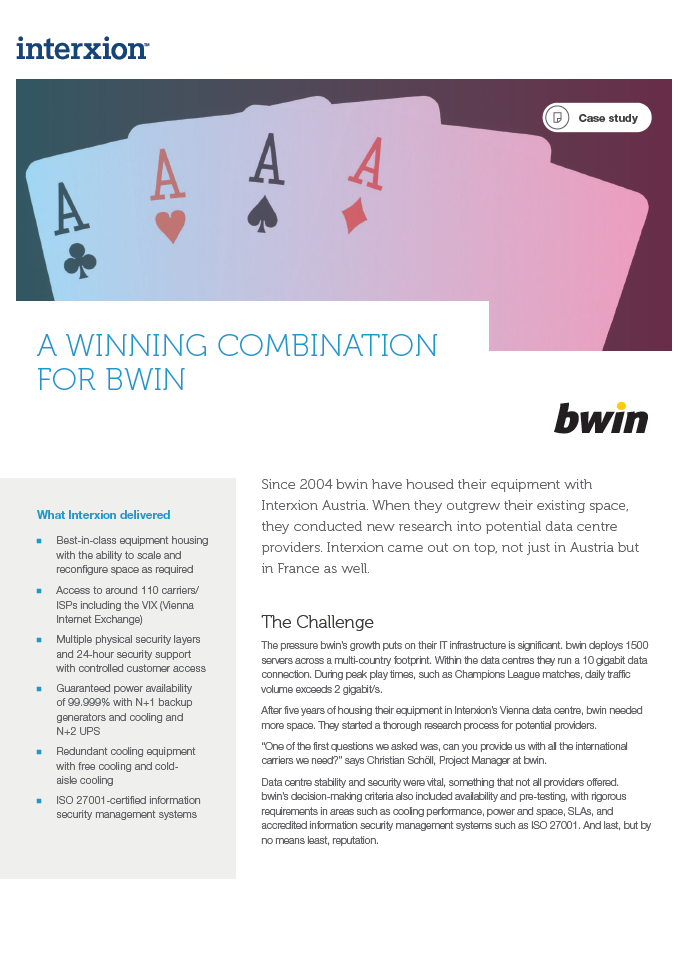 The pressure bwin’s growth puts on their IT infrastructure is significant. bwin deploys 1500 servers across a multi-country footprint. Within the data centres they run a 10 gigabit data connection. During peak play times, such as Champions League matches, daily traffic volume exceeds 2 gigabit/s.

“One of the first questions we asked was, can you provide us with all the international carriers we need?” says Christian Schöll, Project Manager at bwin.

Data centre stability and security were vital, something that not all providers offered. bwin’s decision-making criteria also included availability and pre-testing, with rigorous requirements in areas such as cooling performance, power and space, SLAs, and accredited information security management systems such as ISO 27001. And last, but by no means least, reputation.

After an in-depth market analysis, it quickly became clear that Interxion was still best in class. They offered the best selection of national and international carriers, the best technical specifications, the best references and excellent know-how.

“After an in-depth market analysis, it quickly became clear that Interxion was still best in class”, says Christian Schöll. “They offered the best selection of national and international carriers, the best technical specifications, the best references and excellent know-how.” So the existing partnership with Interxion was extended.

“The Interxion team is very professional – everyone understands fast and reacts promptly and flexibly to our specific requirements,” says Schöll.

“We count on an international partner that knows its business,” says Schöll. “Any downtime on our web applications is not acceptable.”

And then there are the additional opportunities provided through Interxion’s pan-European capability. Interxion’s 39 European data centres are all uniformly designed and operated, with a centralised, multilingual customer service operation. bwin recently took advantage of this opportunity by installing servers in Interxion’s PAR 5 data centre in Paris. Their agreement was quickly extended here as well, showing that bwin’s satisfaction with Interxion goes beyond borders.

Since its launch in 1999, bwin has become the world’s leading publicly listed online gaming platform. Today the company has more than 20 million customers who are registered for a range of sports bets, poker, casino and other games. bwin has 1400 employees, 850 of which are based at the headquarters in Vienna. www.bwin.com