DigitalOcean looks to Interxion Frankfurt to expand into the key German market and deliver the best user experience. “We knew the German developer market represented a fantastic opportunity, but also realized that for us to meet local data protection laws we needed to have a presence in the region. We also knew that for us to offer our high performance cloud services we needed a carrier-dense location to ensure we could deliver the best user experience”, said Karl Alomar, DigitalOcean’s COO. 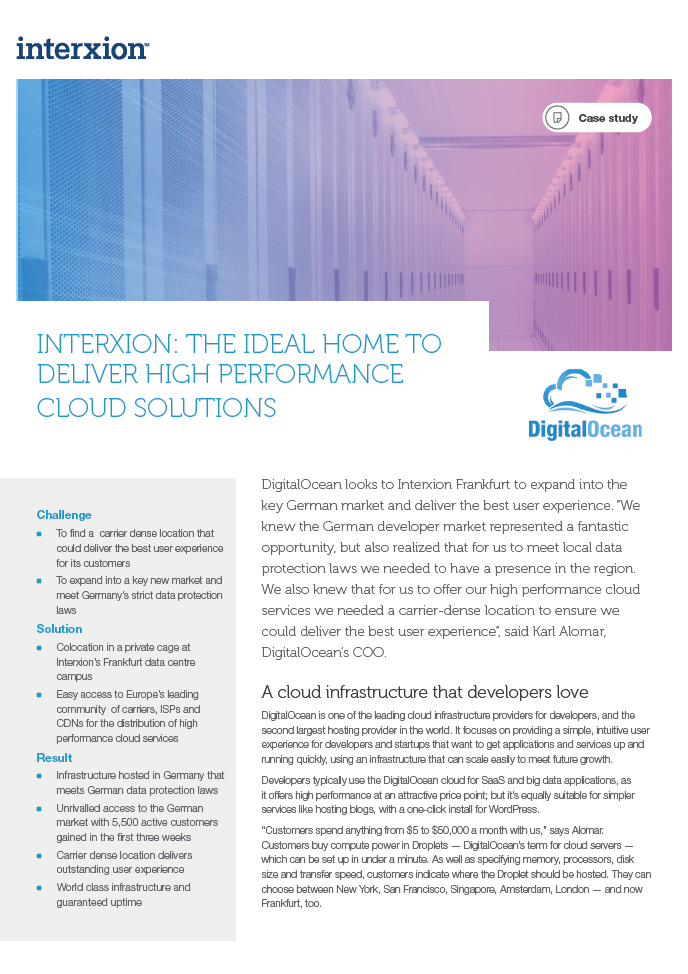 DigitalOcean is one of the leading cloud infrastructure providers for developers, and the second largest hosting provider in the world. It focuses on providing a simple, intuitive user experience for developers and startups that want to get applications and services up and running quickly, using an infrastructure that can scale easily to meet future growth.

Developers typically use the DigitalOcean cloud for SaaS and big data applications, as it offers high performance at an attractive price point; but it’s equally suitable for simpler services like hosting blogs, with a one-click install for WordPress.

“Customers spend anything from $5 to $50,000 a month with us,” says Alomar. Customers buy compute power in Droplets — DigitalOcean’s term for cloud servers — which can be set up in under a minute. As well as specifying memory, processors, disk size and transfer speed, customers indicate where the Droplet should be hosted. They can choose between New York, San Francisco, Singapore, Amsterdam, London — and now Frankfurt, too.

Although it was already present in London and Amsterdam, DigitalOcean knew that Germany, where several hundred thousand developers use the cloud, represented an untapped market for its service. That’s because Germany-specific data protection laws, in addition to EU regulations, mean that German organisations prefer to reduce risk by keeping their data within their own national boundaries.

To meet the needs of the German market, DigitalOcean needed to find a colocation facility in Germany for its cloud infrastructure.

Interxion’s Frankfurt campus was chosen and within three weeks of launch DigitalOcean had 5,500 active customers using their services. “We knew the German developer market represented a fantastic opportunity, but the run rate has significantly exceeded our expectations,” says DigitalOcean’s COO Karl Alomar. “Frankfurt is already supporting itself and making a positive contribution to the business. It’s our most successful international launch to date.”

Excellent user experience is critical to DigitalOcean’s success and due to the high performance nature of it services they always look for carrier-dense locations. “Good connectivity is key to successful cloud services,” says Alomar. “We decided to put our infrastructure in Frankfurt because it’s the hub of all networking in Germany and also has good connectivity to the whole of Central Europe.”

Interxion Frankfurt is Europe’s best connected data centre campus with access to over 400 carriers, ISPs and CDNs. It’s also home to the core infrastructure of the DE CIX Internet Exchange.

“The Interxion campus sits on top of the busiest data pipes in Europe, and we can tap into them,” says Alomar. “That puts us in a powerful position for distribution into the German market and more broadly throughout Europe, and helps us deliver the very best user experience for our customers.”

Interxion’s Frankfurt campus is evolving from one of the world’s largest Connectivity Hubs into a leading Cloud Hub. The fact that companies can meet local data protection laws and access Europe’s largest carrier community makes it the ideal location for cloud providers like DigitalOcean to deliver high performance cloud services throughout Germany and Europe.

In addition to carrier density, Interxion’s Frankfurt campus offers an environment that meets all of DigitalOcean’s needs. “The quality of the Interxion facility is incredible. The power configuration, cooling and other technology are excellent, and it’s a comfortable, easy environment to work in,” says Alomar.

DigitalOcean installed brand-new, highperformance infrastructure inside a private cage at the data centre. “Interxion made sure everything went smoothly for us and that we could get our equipment installed as efficiently as possible,” says Alomar. Interxion offered a flexible rampup agreement that lets DigitalOcean expand as growth phases kick in; and provides remote hands support for dayto-day maintenance.

With hundreds of customers and thousands of Droplets being added every week, DigitalOcean’s growth in Germany has taken off at a rapid rate, confirming the company’s understanding of developers’ cloud needs in that market.

“With our locally hosted cloud infrastructure we can support innovation in the German market, while enabling developers to meet the country’s strict data protection regulations,” concludes Alomar.

DigitalOcean, Inc. is a cloud infrastructure provider focused on simplifying web infrastructure for software developers. The company is headquartered in New York City with data centers throughout the world. www.digitalocean.com