In search of a flexible IT platform able to meet the challenges of delivering new media content, the Swiss Broadcasting Corporation SRG SSR turned to its subsidiary, SWISS TXT, for help. This multimedia specialist developed Swiss Media Cloud, a scalable, highly available, private cloud environment that now hosts all of SRG SSR’s multimedia infrastructure and supports many other Swiss companies in the media and other sectors. 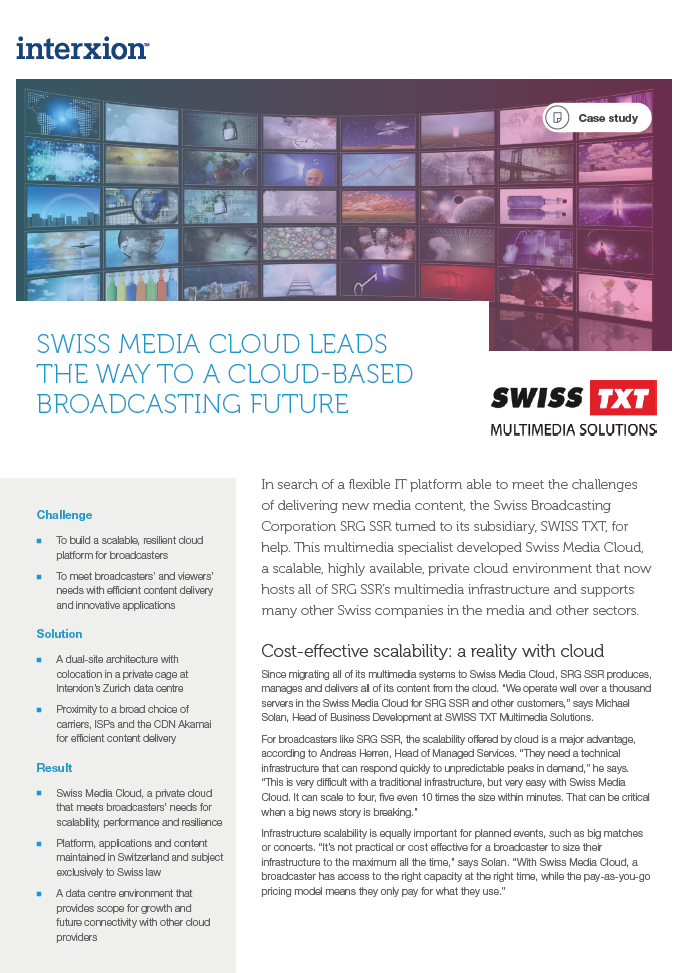 Since migrating all of its multimedia systems to Swiss Media Cloud, SRG SSR produces, manages and delivers all of its content from the cloud. “We operate well over a thousand servers in the Swiss Media Cloud for SRG SSR and other customers,” says Michael Solan, Head of Business Development at SWISS TXT Multimedia Solutions.

For broadcasters like SRG SSR, the scalability offered by cloud is a major advantage, according to Andreas Herren, Head of Managed Services. “They need a technical infrastructure that can respond quickly to unpredictable peaks in demand,” he says. “This is very difficult with a traditional infrastructure, but very easy with Swiss Media Cloud. It can scale to four, five even 10 times the size within minutes. That can be critical when a big news story is breaking.” Infrastructure scalability is equally important for planned events, such as big matches or concerts. “It’s not practical or cost effective for a broadcaster to size their infrastructure to the maximum all the time,” says Solan. “With Swiss Media Cloud, a broadcaster has access to the right capacity at the right time, while the pay-as-you-go pricing model means they only pay for what they use.”

Swiss Media Cloud was designed and built to deliver exceptional agility and performance. It’s housed across two data centres: SWISS TXT’s own facility in Biel and the Interxion data centre in Zurich, both located at Internet peering points. “The implementation at Interxion went smoothly and we felt well supported by the Interxion team throughout,” reports Solan. Swiss Media Cloud’s dual-site architecture provides for disaster tolerance while ensuring content remains in Switzerland and subject exclusively to Swiss law. In addition, it gives customers choice about the resilience of their solution — including active/active and active/passive setups, and full or partial content replication. Managed asset management and content streaming and delivery applications can also be integrated with the infrastructure. Some of the highest circulation Swiss newspapers use these services to store and stream video content on their web portals.

In addition to Interxion’s reputation for security, high availability and professional operations, what really stood out for us was their commitment to supporting the digital media sector, and the density of connectivity providers at the data centre.”

Interxion Zurich was a natural choice for SWISS TXT, as Solan explains: “In addition to Interxion’s reputation for security, high availability and professional operations, what really stood out for us was their commitment to supporting the digital media sector, and the density of connectivity providers at the data centre, including the CDN Akamai.”

Interxion’s carrier neutrality attracts a wide range of local and international carriers, Internet exchanges and ISPs. This gives SWISS TXT access to the bandwidth and peering it needs for efficient delivery of stable traffic streams, such as podcasts and website content, over its own content delivery network (CDN). For spiky, harder-to-predict streams, or events that generate huge traffic peaks, SWISS TXT can supplement its own CDN with the scale and power of Akamai, having established a cross-connect to the Akamai PoP inside the Interxion data centre. SWISS TXT engineers configure solutions that combine the company’s own CDN with Akamai to optimise the cost and speed of content delivery for customers.

SWISS TXT continues to develop innovative applications on the Swiss Media Cloud platform that enable broadcasters to deliver more value and enjoyment to viewers. These include an online player for live streaming and time-shifted viewing that’s compatible with multiple devices; and a smart TV portal that delivers interactive ‘red button’ services and live streaming to the TV screen through HbbTV. “The rapid take-up of Swiss Media Cloud since its launch demonstrates that cloud has an important role to play in the media and broadcast sector,” says Solan. Although it’s currently a self-contained private cloud, Solan acknowledges that hybrid solutions integrating Swiss Media Cloud with public or other private clouds are a likely future requirement as the media sector continues its rapid evolution. “Our presence at Interxion’s cloud-neutral data centre means that, when the time comes, we’ll be well placed to work closely with the many private and public cloud providers who colocate alongside us,” confirms Solan.

SWISS TXT is a multimedia service provider focusing on online video. We accompany our customers on the entire digital value chain by delivering end-toend solutions from one source. www.swisstxt.ch/de/ multimedia-solutions