One of the oldest cities in the industrialised world, Amsterdam has always stood at the forefront of international business and commerce. Located within hours of many major EU city centres (such as Paris, London and Frankfurt) and home to the world's oldest stock exchange (AEX, now part of Euronext), the city has always had an offering for those involved with global finance and trade.

Yet over the last decade, Amsterdam has become among the most attractive locations for U.S. enterprises looking to serve the European market; and for CTOs, and IT experts in the know, it’s easy to understand its appeal.

Here are five reasons why Amsterdam has become the heart of the EU’s digital economy:

1) Foreign Direct Investment. The city has undergone a digital renaissance and has quickly become a growth centre for digital media and commerce, enticing international companies like Facebook, Netflix, and Salesforce to establish their European headquarters in the heart of the Netherlands. In fact, over 170 ICT (Internet and Communications Technology) companies from across the globe have chosen Amsterdam as their European HQ.

2) Superior Connectivity. Amsterdam is one of the most connected cities in the EU, serving as home to the Amsterdam Internet Exchange (AMS-IX), which is one of the largest Internet exchanges in the world with over 800 members. In November 2016, peak traffic surpassed 5 Tb/s.

The city is highly connected both by fiber optic networks and undersea cables that connect to the eastern seaboard of the United States, London, and other major cities across the Atlantic. The network infrastructure within the city also supports over the top (OTT) content distribution, which has served to feed the voracious appetite for digital content by consumers within the Netherlands and nearby countries. In fact, Amsterdam’s Science Park business park, home of the AMS-IX, houses over 150 networks and is capable of reaching 80% of European customers within 50 m/s. 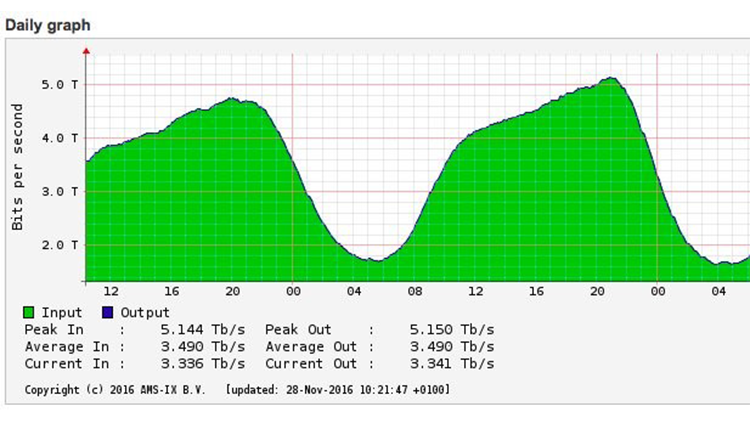 3) Digitally Advanced. Social media, online gaming, and streaming media services have grown in popularity exponentially as the upwardly mobile, multi-lingual population of the Netherlands have fully embraced the digital lifestyle. The Netherlands currently has the highest penetration of Netflix subscribers in the EU (outpacing larger neighboring countries such as Germany), and also boasts one of the largest online gaming communities, accounting for more than 20% of online gaming traffic across the continent. 4) Skilled Workforce. The local workforce is not only highly educated but speaks multiple languages that include Dutch, French, German, and of course English. Ranked seventh globally in higher education, the Netherlands has more skilled labor than most comparable cities in the EU, making it easier to conduct business across borders. 5) Business Friendly. Government programs such as the Highly Skilled Migrant Visa program, along with the increasing availability of skilled part-time and contract labor, have further simplified the process of meeting the on-demand needs of modern global businesses.

With the ability to connect to over 244 million potential customers across the continent, Amsterdam is naturally the nexus of Europe. It remains an attractive and highly sought after city for any company looking to enter or broaden their presence within the region.

As one of the best-connected cities in Europe, Amsterdam is a key hub for international business.

Extend your reach into new markets : Wherever you invest with us, you’ll have the right connectivity for your business.

An interactive guide to our global coverage

Interxion is the interconnection hub for the world’s digital businesses. For 20 years we’ve been helping our customers increase their market share, transform the quality of their services and extend their reach into new markets.