The media coverage and public enthusiasm for the FIFA World Cup 2018 are an interesting omen of how France’s 2024 Olympics will be followed.

The fact that Marseille will be hosting the sailing events and several football matches will reinforce Marseille’s position as a content city. Mediterranean capital for data exchange, Marseille will then be the very source of massive data flows racing towards the TVs, tablets and smartphones of the entire world.

The Olympic Games organized in Rio de Janeiro in 2016 have marked the end of the absolute monopoly of TV as the Olympics’ preferred broadcast channel. In the United States, for example, the NBC Group has reported a 21% decrease in TV audience, compared to the 2012 Olympic Games; at the same time, the audience of its streaming platform rocketed, as its live streams reached almost 50 million viewers — more than half of which was under 35 years old — totaling 3.4 billion streaming minutes.

These figures show that the progressive, but certain, shift towards a massive use of streaming and over-the-top (OTT) contents is gaining ground when it comes to sport events’ broadcast. This is what we observed during the Football World Cup in Russia, watched on legal streaming platforms by 35% of Chinese viewers, and by 25% of the 11-20 years old audiences. Actual volumes might even be bigger, if one considers how many people watched it on illegal platforms.

This trend will continue to grow in the upcoming years, at the level of whole continents. In Africa, for example, where smartphones are becoming widespread: WAP traffic, used on classical mobile phones, has been halved over the last two years, in favor of 3G and 4G connections, which will in turn increase by 155% before 2022, from the current 419 million to more than 1.7 billion. Mobile video consumption has already been doubled between 2015 and 2016, and the gradual deployment of 5G technology, from 2021 on, will increase this phenomenon even further.

This movement raises the question of user experience’s improvement. The optimization of latency and bandwidth demand is at the heart of the challenges, in order to allow the improvement of sound and image quality and deliver an optimal user experience. Indeed, the quality issue is critical: according to an Akamai study, if a video freezes for 2 seconds, 25% of the audience may abandon watching – a number rising to 50% if the video freezes for 5 seconds.

It would be wrong to believe that these issues are the telecom operators and Internet service providers’ responsibility, because their networks are built on an essential infrastructure: data networks. From this standpoint, Marseille enjoys a privileged position. France’s second digital hub it is also the Mediterranean’s main interconnection point, towards which converge data exchange roads, whether subsea cables – through which 90% of Telecom and IP flows transit – terrestrial cables or satellites. This strategic position and the access to over 4.5 billion users, allow operators to broadcast their content, while delivering an appropriate user experience across Europe, Africa, the Middle East and Asia. Over the last 20 years, when the first cables were installed, Marseille has transformed itself. Originally a transit city, when only a few racks were enough to ensure the successful liaison between subsea and terrestrial cables, it has become a content city and concentrates today much bigger platforms. In Marseille, the current deployment challenges concern directly the major players of the digital sector and the global economy.

This paradigm shift is an excellent news for the city, as it implies the companies’ needs in terms of data hosting, exchange and distribution will significantly increase in the years to come. It is precisely to address these new needs that players, such as Interxion, intervene to boost the city’s data center technical capabilities. The objective: deliver the necessary infrastructure to the city, that will support the multiplication of global data exchanges, and more specifically towards Africa, Middle-East and Asia.

During the 2024 Olympic events hosted in Marseille, the eyes of the world will be looking to the city, but it is mainly the tens of millions of smartphones that will allow their owners to follow the performances of their favorite team. For a few weeks, and we must rejoice about it, Marseille will then be a global reach content city. 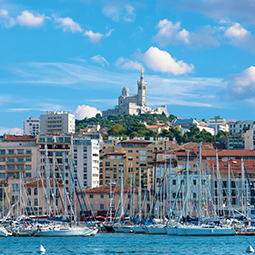 Get the facts & figures behind Interxion's connected solutions. Read more about Marseille & contact us to discuss further.

Get the facts & figures behind Interxion's connected solutions. Read more about MRS2 & contact us to discuss further.