It’s not about making a quick buck — it’s about working with customers who have a vision, who we can get close to and add value to over the long term,” says Mitesh Patel, Managing Director of Fifosys. This London-based provider of managed cloud, consultancy and support services to SMEs recognised a similar ethos in Interxion when it was looking for a colocation partner for its cloud platform. 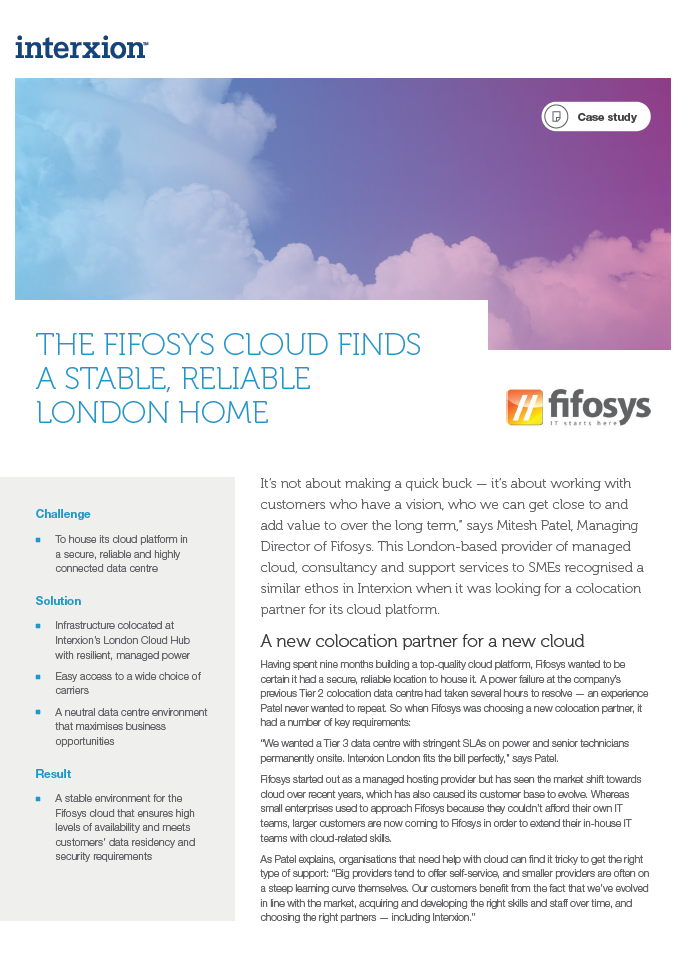 Having spent nine months building a top-quality cloud platform, Fifosys wanted to be certain it had a secure, reliable location to house it. A power failure at the company’s previous Tier 2 colocation data centre had taken several hours to resolve — an experience Patel never wanted to repeat. So when Fifosys was choosing a new colocation partner, it had a number of key requirements:

Fifosys started out as a managed hosting provider but has seen the market shift towards cloud over recent years, which has also caused its customer base to evolve. Whereas small enterprises used to approach Fifosys because they couldn’t afford their own IT teams, larger customers are now coming to Fifosys in order to extend their in-house IT teams with cloud-related skills.

As Patel explains, organisations that need help with cloud can find it tricky to get the right type of support: “Big providers tend to offer self-service, and smaller providers are often on a steep learning curve themselves. Our customers benefit from the fact that we’ve evolved in line with the market, acquiring and developing the right skills and staff over time, and choosing the right partners — including Interxion.”

Interxion is interested in their customers’ roadmaps and keen to help them grow their businesses, and we’re benefiting from that.

Owning and operating its own cloud lets Fifosys meet the varying needs of organisations in many sectors, including retail, education and property. Among its customers is Get Living London, the company that’s renting out 1,400 homes in London’s East Village — originally the Olympic Village for the 2012 Summer Games. Fifosys has installed a cloud-based communications system that provides Get Living London’s management and marketing suite with voice and broadband services and access to all of its management and letting applications via virtualised desktops.

“There are no PSTN lines: everything comes from the cloud, so it’s scalable and flexible,” says Patel. “Get Living London is in the cloud, and the cloud is at Interxion.”

The cloud-based desktop virtualisation service developed by Fifosys offers much more than the standard applications typically available with virtual desktops. The company cloud-enables internal and sector-specific applications to create a desktop that delivers everything a user needs, whenever and wherever they need it.

For an accountancy firm that wanted to increase billable hours without adding headcount, Fifosys streamed and published 34 applications through a single virtual desktop that’s speeding up business. Armed with laptops, the firm’s roving representatives can respond to clients’ needs on the spot instead of going back to the office to research the answers.

“We couldn’t do any of it without the right home for our cloud,” says Patel. “As well as being professionally run, the Interxion data centre is carrier neutral. That means we have access to around 50 carriers, which gives us flexibility and choice when connecting our customers to their Fifosys services.” Data residency and security are high on the agenda for many Fifosys customers, and Interxion’s city-centre location gives them peace of mind. “Our customers know exactly where their data is and that it doesn’t leave the UK. They — and their auditors — can visit the data centre, experience the exacting security that controls access, and see for themselves the tin their cloud is on,” says Patel.

Interxion is also cloud neutral, so doesn’t compete with Fifosys for customers. In fact, it’s quite the opposite, as Patel explains:

“Interxion is interested in their customers’ roadmaps and keen to help them grow their businesses, and we’re benefiting from that. They’ve let us hold customer meetings at the data centre’s offices, and invited us to join their stand at a big industry event, which led to a number of opportunities for us.”

Fifosys is a trusted technology partner for fast-growing businesses in sectors including retail, education, and property development and management. Vendor-independent, Fifosys combines specific elements from its wide-ranging portfolio of supported products to create end-to-end solutions that help its customers improve IT services performance, reduce costs and increase productivity. www.fifosys.com